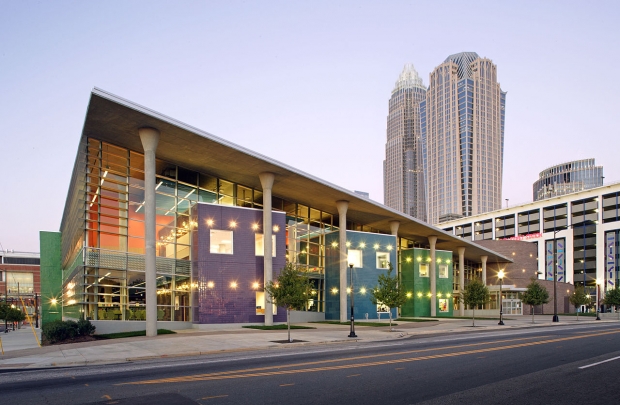 The city’s public school system, Charlotte-Mecklenburg Schools, is the second largest in North Carolina and 17th largest in the nation.[65] In 2009, it won the NAEP Awards, the Nation’s Report Card for urban school systems with top honors among 18 city systems for 4th grade math, 2nd place among 8th graders.[66][67] An estimated 144,000 students are taught in 164 separate elementary, middle, and high schools.

The Student Union Quad of UNC Charlotte’s main campus
Charlotte is home to a number of notable universities and colleges such as Central Piedmont Community College, Charlotte School of Law, Johnson C. Smith University, Johnson & Wales University, Queens University of Charlotte, and the University of North Carolina at Charlotte. Several notable colleges are located in the metropolitan suburbs. In Davidson, Davidson College is ranked in the top 10 nationally among liberal arts colleges according to U.S. News & World Report. Additional colleges in the area include Belmont Abbey College in the suburb of Belmont, North Carolina, and Wingate University in the suburb of Wingate, North Carolina. Also nearby are Winthrop University, Clinton Junior College and York Technical College in Rock Hill, South Carolina.

Central Piedmont Community College is the largest community college in the Carolinas, with more than 70,000 students each year and 6 campuses throughout the Charlotte-Mecklenburg region. CPCC is part of the statewide North Carolina Community College System.

Pfeiffer University has a satellite campus in Charlotte. Wake Forest University, with its main campus in Winston-Salem, North Carolina, also operates a satellite campus of its Babcock Graduate School of Management in the Uptown area. The Connecticut School of Broadcasting, DeVry University, and ECPI University all have branches in Charlotte. The Universal Technical Institute has the NASCAR Technical Institute in nearby Mooresville, serving the Charlotte area. Montreat College (Charlotte) maintains a School of Professional and Adult Studies in the city.

ImaginOn Children’s Theater and Library
The Charlotte Mecklenburg Library serves the Charlotte area with a large collection (more than 1.5 million) of books, CDs and DVDs at 15 locations in the city of Charlotte, with branches in the surrounding towns of Matthews, Mint Hill, Huntersville, Cornelius and Davidson. All locations provide free access to Internet-enabled computers and WiFi, and a library card from one location is accepted at all 20 locations.

Although the Library’s roots go back to the Charlotte Literary and Library Association, founded on January 16, 1891, the state-chartered Carnegie Library which opened on the current North Tryon site of the Main Library was the first non-subscription library opened to members of the public in the city of Charlotte. The philanthropist Andrew Carnegie donated $25,000 dollars for a library building on the condition that the city of Charlotte donate a site, and $2500 per year for books and salaries, and that the state grant a charter for the library. All conditions were met, and the Charlotte Carnegie Library opened in an imposing classical building on July 2, 1903.

The 1903 state charter also required a library be opened for the disenfranchised African-American population of Charlotte. This was completed in 1905, with opening of the Brevard Street Library for Negroes, an independent library in Brooklyn, a historically black area of Charlotte, on the corner of Brevard and East Second Street (now Martin Luther King Boulevard). The Brevard Street Library was the first library for free blacks in the state of North Carolina, some sources say in the southeast. The library was closed in 1961 when the Brooklyn neighborhood in Second Ward was redeveloped, but its role as a cultural center for African-Americans in Charlotte is continued by the Beatties Ford branch, and the West branch of the library system, as well as by Charlotte’s African-American Cultural Center.