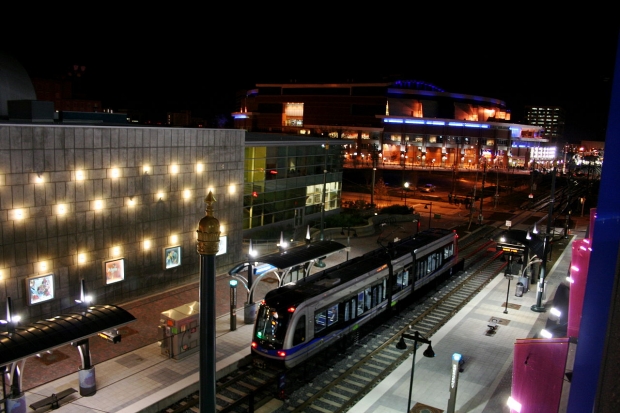 Waste treatment
Charlotte has a munincipal waste system consisting of trash pick up, water distribution and waste treatment. There are 5 waste water treatment plants operated by CMUD Charlotte has a biosolids progra. Some Chester residents spoke out against the program on Feb 26, 2013.[78] Charlotte’s sludge is handled, transported and spread on farm fields in Chester by a company called Synagro, a wholly owned subsidiary of the Carlyle Group[79] Charlotte’s sludge is of the “CLASS B” variety, which means it still contains detectable levels of pathogens.

In 2011, the city of Charlotte and CATS staff conducted public forums to present the Final Environmental Impact Statement (EIS) and gather public input from residents, property owners and business owners located in Northeastern Charlotte which is where the LYNX light rail is proposed to be extended from uptown Charlotte to UNC‑Charlotte campus.

Walkability
A 2011 study by Walk Score ranked Charlotte the 49th most walkable of the fifty largest cities in the United States.

Charlotte’s beltway, designated I-485 and simply called “485” by local residents, has been under construction for over 20 years, but funding problems have slowed its progress. Completion of the final segment is due in 2014.[85] Upon completion, 485 will have a total circumference of approximately 67 miles (108 km). Within the city, the I-277 loop freeway encircles Charlotte’s uptown (usually referred to by its two separate sections, the John Belk Freeway and the Brookshire Freeway) while Charlotte Route 4 links major roads in a loop between I-277 and I-485. Independence Freeway, which carries U.S. 74 and links downtown with the Matthews area, is undergoing an expansion and widening in the eastern part of the city.

Charlotte Douglas International Airport is the sixth busiest airport in both the U.S. and the world overall as measured by traffic (aircraft movements). It is served by many domestic airlines, as well as international airlines Air Canada, Insel Air, and Lufthansa, and is the largest hub of US Airways. Nonstop flights are available to many destinations across the United States, as well as flights to Canada, Central America, the Caribbean, Europe, Mexico, and South America.

The city is planning a new centralized multimodial train station called the Gateway Station. It is expected to house the future LYNX Purple Line, the new Greyhound bus station, and the Crescent line that passes through Uptown Charlotte.