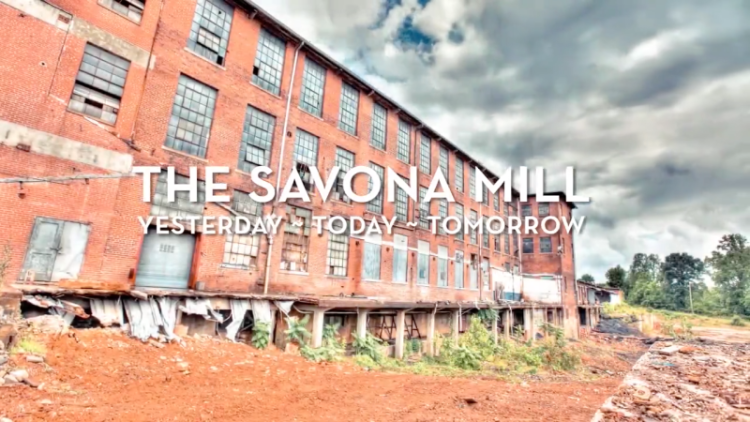 Argos Real Estate Advisors, known for its commercial real estate work in South End and Charlotte’s urban core, is now using its experience to adapt and reuse a prominent site in the city’s budding West End. In 2012, Argos purchased the 180,000 square foot Savona Mill, an early 20th Century textile mill located at 528 S. Turner Ave. and just over a mile from uptown. Since then, the company has worked with the surrounding neighborhoods to create a vision for the historic property and the area along the Stewart Creek Greenway, adjacent to the mill, to uptown. The property represents one of only a handful of former mills in the city that remain undeveloped.

“It’s a special project,” says Greg Pappanastos, president of Argos. “The mill was an important economic driver for these neighborhoods, and, with some vision and the right plan, it will be a special place again.” His company’s plan involves leveraging nearby amenities, including greenways, parks and a century-old rail corridor, in the restoration of the mill. Argos has called upon the Charlotte and L.A. based design firm Shook Kelley, which specializes in urban planning and branding, to create a master plan that will aide in transforming the site into a vibrant hub of creative offices, experiential retail , studios and residences, all closely connected to the adjacent green space.

Blue Blaze Brewing, a craft brewery led by local entrepreneurs Craig Nunn and Sven Giersmann, is the project’s first tenant. The brewery will occupy 8,000 square feet facing the greenway. The decision to locate in a renovated mill, overlooking a park, greenways and other trails aligned closely with the brewery’s core company values. ”Trail culture is embedded in everything we do,” adds Nunn. “We believe trail enthusiasts will appreciate the adjacency of the trails and parks and the use of sustainable methods in our beer-making process.”

Other plans for Savona Mill currently include the relocation of a design company headquarters to 45,000 square feet, and a 10,000 SF incubator kitchen for food entrepreneurs, a sector largely composed of graduates from nearby Johnson & Wales University. Argos is working closely with Lynn Shanklin Caldwell, creator of South End’s highly acclaimed Atherton Market. Caldwell recently stepped away from day-to-day operations there to pursue her latest endeavor, the Charlotte Food Innovation District, a strategic plan to provide much needed infrastructure to the city’s local food system.

Both Caldwell and Pappanastos envision the mill as the District’s hub, where various food related businesses are co-located, utilizing shared infrastructure to create jobs and foster community through cultivating interesting and compelling retail concepts. “The kitchen is the first of many opportunities we see to partner at the mill,” says Caldwell. “The history and character of the building allow us to create an exciting destination, while also making a real economic impact.” The commercial kitchen facility will also serve a special event venue housed in the oldest portion of the mill, built in 1915.

Other community development initiatives are underway nearby, including upgrades to the Stewart Creek Greenway by Mecklenburg County. The County is putting the finishing touches on the $1.25 million project that will have the greenway fully paved from the mill to Cedar St. in Third Ward by fall 2015. The greenway intersects three County parks and the Irwin Creek Greenway along its 1.25 mile route. At the Cedar St. end, pedestrians have only a short walk to amenities like Romare Bearden Park, the Charlotte Knights’ BB&T baseball park and the NFL Carolina Panthers’ Bank of America Stadium. The Seversville neighborhood, where the mill is located, has just undergone a rebranding effort, adding gateway signage and special toppers to all of its street signs. Strong leadership is helping the neighborhood progress quickly.

Argos completed the tax credit eligibility process on the mill last fall and now is able to obtain federal and state tax credits that will aide in the project’s development. Work is in progress now to accommodate the brewery, which plans an opening in spring 2016.