It’s had two retirement parties. The first was in 1938 when then-Mayor Ben Douglas and other dignitaries boarded trolley Car 85 at the Visulite Theater on Elizabeth Avenue and rode it to The Square in uptown Charlotte.

There, on March 14 that year, they pulled the plug on the electric streetcar system that had helped develop Charlotte’s early suburbs such as Dilworth, Elizabeth and the westside’s Wesley Heights.

The second party came in 2005, after Car 85 was found as a condemned house, restored and put on a spur of track from uptown to Atherton Mill on South Boulevard, helping develop the modern South End community and a light-rail line that churns to Pineville.

Now, after being mothballed 10 years, the trolley car may be brought out of retirement again – with a goal of generating a similar energy to the city’s westside.

A nonprofit group of trolley lovers, called Lakewood Trolley Inc., is working to get the car placed permanently on an abandoned piece of former streetcar track. They plan to run it from Cedar Street in uptown’s Third Ward 2 miles northwest to the 29-acre Martin Luther King Jr. Park in what some residents are beginning to brand as the Historic West End community. It would run along the county-owned Stewart Creek Greenway.

The group is in the early stages but has support of the N.C. Department of Transportation’s rail division to run the car on state-owned track, “if they can find the money to do the project,” said Allan Paul, the division’s deputy director.

“We think it’s a good idea, and it would use a corridor that is currently under-utilized,” Paul said. “We’d like to see a rail use for it again. This group has certainly demonstrated that they can pull something like this off – like they did in South End.”

The trolley has been stored in the CATS light-rail maintenance facility since it was pulled from the track the last time. It has to be moved by Oct. 1 because CATS needs the space.

The Charlotte-Mecklenburg Historic Landmarks Commission will vote Monday to take possession of the car and have it moved likely in mid-September to a warehouse on the westside owned by Johnson C. Smith University, said Dan Morrill, the commission’s consulting director.

Then it’s up to Lakewood Trolley to find the money to get the track and a trestle repaired and the car moving people again. Estimates are $2 million to $3 million, said Greg Pappanastos, president of Argos Real Estate Advisors who chairs the Lakewood Trolley board.

Two years ago, his company bought a century-old mill, and Pappanostas offered a portion of the mill to store the trolley car and create a streetcar museum. The rest will be developed by Argos. The trolley idea came first, then he found the mill, he said.

“We believe it can drive economic and neighborhood development on the West End, and enhance the parks and greenways along the way.”

The Lakewood in the nonprofit’s name comes from Lakewood Park, a popular amusement park in west Charlotte during the early 20th century. It was built 3 miles northwest of uptown by developer Edward Dilworth Latta and his Charlotte Consolidated Construction Co., known as the 4Cs.

He needed a way to get potential homebuyers to his development, so Latta bought Charlotte’s horse-drawn streetcar system, had it electrified as a trolley line and built the track to Dilworth.

Eventually lines were built all over the city as new neighborhoods sprung up, including into the westside to the Wesley Heights and Seversville communities.

Soon, Latta began to run out of land in Dilworth, so he dismantled much of Latta Park and built Lakewood Park in 1910. He ran trolley cars to the park on the Piedmont & Northern Railroad tracks installed by the Southern Power Co. (a predecessor to Duke Energy) that linked Charlotte to Gastonia.

The Depression brought the park hard times, with attendance dwindling by 1933. Five years later, a tornado with heavy rains washed out the dam and drained the lake. It was never rebuilt. 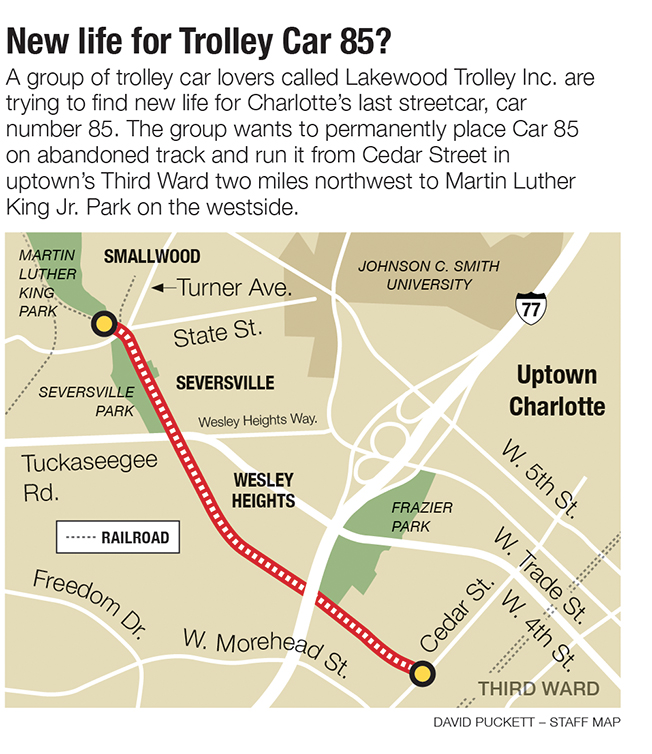 Many of the trolley cars were sold, including Car 85.

They stripped its engine and motor and sent it to the airport to provide office space for the Air National Guard. It spent time as a convenience store until the 1950s, when a Huntersville woman bought it and moved it to David Street for rental housing.

Then in the mid-1980s, Morrill put word out that he wanted to find a streetcar.

“Charlotte’s history was so intimately tied up with the electric streetcar,” he said. “I felt we needed to add to the city’s collection of artifacts an operational streetcar.”

A city planner found Car 85 on cement blocks condemned. Morrill and his commission didn’t know what they had until they stripped the layers of paint.

They raised $250,000 to restore it and installed a motor and controls.

Volunteers first ran it on weekends from Stonewall Street to Atherton Mill in South End. Then as regular runs increased, the route was extended to Seventh Street until 2005.

It was wildly popular and captured Charlotte national headlines for reviving an original streetcar. But then modern light rail replaced the relic.

“That car has demonstrated its ability to transform,” Morrill said. “We believe it can do it again – that it would stimulate development and revitalize westside neighborhoods.”

J’Tanya Adams, president of the westside advocacy group Historic West End Partners, said she believes the trolley car could do something that city leaders have been unable to achieve – reconnect westside streetcar neighborhoods to each other and to Charlotte.

Since the 1970s, westside residents have felt cut off from the city, isolated physically and psychologically by Interstate 77.

“We started three years ago working with the trolley organization to get Car 85 back on line, and begin to connect these historical neighborhoods we have here,” said Adams, a Lakewood Trolley board member. “These are strong, thriving neighborhoods that the rest of Charlotte doesn’t know about. Running the trolley throughout here would introduce people to a whole new chapter of Charlotte’s history.”

The 2-mile run would pass through Third Ward, Wesley Heights, Seversville and brush Smallwood and link uptown and westside parks.

But they’ve cleared a couple already. Getting state support is one. The state rail division’s Paul said he’s worked with Mecklenburg Park & Recreation officials to remove gravel over portions of the track that is part of Stewart Creek Greenway and relocating the greenway permanently to the side.

Advisers told Lakewood Trolley they’d need a destination for the project to work.

“You can’t just have a car going from uptown to nowhere,” Pappanastos said.

So they decided MLK Park would make one good destination. Then Pappanastos, whose specialty is urban revival, found the Savona Mill at the end of Turner Street, a 180,000 square-foot boarded-up former cotton mill.

His company, Argos, bought it in 2012 and committed to provide storage space for the trolley at nights and a museum/shop to tell the story of Charlotte as a streetcar city. He also believes it could be developed into cafes, shops and artist studios – a popular stop on the trolley that is close to the park.

The mill could be to the Lakewood trolley run what Atherton Mill was to the trolley run from uptown. The mill is a candidate for the National Register of Historic Places.

Lakewood Trolley, Pappanastos said, is making sure it gets feedback from neighbors about Car 85, the project and the kind of development they hope it would bring.

“We want everyone to be involved in a renaissance of one of the greatest parts of the city,” he said. “We think it has the ability to create pride and destination.”

That’s if the car runs. CATS committed that it would deliver Car 85 soundly operating. Last week, Pappanastos and others watched as CATS mechanics cranked it up.